It's A Wonderful Life

This was our Holiday Card:

Dear Friends and Family,
It has been a ho hum year with little to report.  Truly, nothing much happened.  Oh, wait, maybe a couple things happened...  January was spent in and out of the hospital and before February started I had seen my last days outside for quite some time.  It was a pleasure to spend weeks and weeks (and weeks and weeks) in such high-class accommodations as Columbia Presbyterian Hospital.  Nothing says luxury like a bed pan.  Eric had a wonderful time (though he did a superb job) managing the house and visiting me as often as humanly possible.  Before February was out we got three new toys.  Santa himself couldn't have brought anything better.  Eloise, Marie-Pierre and Annecy were born the morning of February 23rd at 32 weeks.  Eric was as excited for the babies as I was to be able to walk again (I had been kindof large...).

March was spent in the NICU at Columbia Presbyterian.  Eric and I got there at 6 in the morning, Eric went to work and came back afterward and we tried to leave around 8 or 9 each night.  We were the lucky ones as nothing was "wrong" with the babies.  They were just learning how to eat, breathe and keep themselves warm and generally being show-offs with how cute they were.
At the end of March we brought everyone home and weirdly, our spacious New York apartment suddenly didn't seem so spacious and Eric's 13 hour work days suddenly seemed less realistic.  So, after months of wonderful helpers staying with us, Eric took a job with Pearson in the Phoenix, AZ area and we picked up and moved.  Taking 5 month triplets on a plane was not as bad as you would think and almost everyone arrived in one piece, even Fenway (though it was touch and go there for a while).  We overtook Kathy and Bradford's house while we searched for our own.  We finally found a home in Gilbert, AZ (a Phoenix suburb) but it won't be built until April so Bradford will have to put up with "Babies and dogs EVERYWHERE" for a few more months.  Secretly I think he kinda likes all those huge heads staring at him creepily everywhere he goes.

The babies are growing great and, unfortunately for mom, are all crawling like pros.  They are exactly as exhausting as having three infants sounds but they are so dang cute that we just can't bring ourselves to give any of them away.  Eric is enjoying his new role as Assessment Specialist at Pearson and Fenway is having a GREAT time hanging out with Timba all day and having a back yard to destroy.  Phoenix is treating us well and our only regret is that our east coast posse can't be here with us. 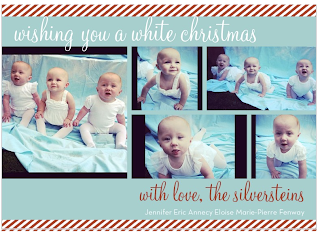 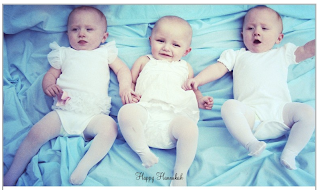