A Passion for Urination

Following my first descent into the underworld of medical care (aka hospital stay 1) it was made very clear to me that if my cervix showed any significant changes during my weekly ultrasounds I would be thrown back in to be fed on by the nurses of antepartum. It made every ultrasound a more thrilling and suspenseful experience. Since I was lacking in thrill and suspense in my daily life, due to its home-bound nature, I welcomed the excitement.

It was a cold and blustery day in January, the 27th, to be exact. I exited my town car (read taxi) and climbed the harrowing distance to the door. Alright, too slow. I went to my ultrasound and, Yippee, my cervix was about 1.6 so no real change. Also, Eric got in trouble for using the wrong chair. I warned him not to bring in a different chair but he assured me no one would even notice but what was the first thing the tech noticed. Oh , you know what it was. She made him re-arrange but let him keep his choice of chair. Anyhoo, I then skipped giddily over to the doctor's waiting room, assured of my going home by the excellent cervical measurement. Eric had a snow day so he actually got to come with me which was exciting in itself. They were very backed up due to people not being able to get there for work and just the weather in general so we waited for at least an hour and a half. When we finally went back it was business as usual. Got my weight, checked the ultrasound report for the cervical length, etc. The doctor came in shortly and was asking about how I was feeling. I told her that my uterus had been feeling a lot tighter for significantly longer periods of time but it wasn't painful or regular or accompanied by cramping so it was probably fine. She delved a little deeper asking exactly what the tightening felt like, how long it had been lasting, how long it was lasting now, etc. Apparently, my idea of normal was actually NOT normal (typical right?). She was pretty concerned with the fact that I was literally contracting all the time. She did a cervical exam and I was 2cm dilated and 80% effaced. So, I bet you can't guess where I went.... Oh, how did you know? You're right. Back to the hospital. Luckily, I was significantly less petrified this time for several reasons. First, this was old hat now. I had done the whole l&d triage thing twice before. Second, I knew that no matter how the doctor's were talking, it didn't actually mean the babies were for sure coming right away. Third, we were past the magic 28 weeks which meant that, barring any outside complications, their chance of survival was in the high 90%s and their risk of long-term, debilitating effects such as cerebral palsy was greatly diminished.

The docs did the usual shenanigans. They hooked me up to thousands of monitors, checked my cervix for themselves, etc. They did notice that I was pretty much contracting every 2-4 minutes (this had been happening 24 hours a day for at least a week). Given the cervix and the contractions they had good reason to believe that true labor could be starting. They had 2 goals at this point, a. stopping the labor and b. preparing the babies in case they couldn't. 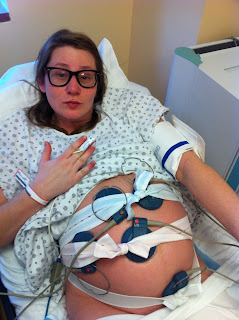 *All my sexy monitors. There are 3 heart monitors, 2 contractions monitors, a blood oxygen monitor and a blood pressure cuff. These stayed on throughout the night and added to that were more leg squeezers.*

Thus begins the true tale of horror and torture. I was not taken to the cozy antepartum ward where I spent those 5 carefree days in early January. I was taken to the high-risk area because I needed continuous monitoring, meaning the contraction monitor and fetal monitors needed to stay on at all times.

This is how I got into drugs. First they started me on a Magnesium Sulfate drip. This can help with contractions and also helps the babies’ brains develop a bit more quickly. The drug itself was a trip, especially in the beginning because they start you on a very high dose for the first half hour before lowering the dose for the remainder. I was sweating like a fat, fat pig, shaking, extremely drowsy and frankly, a little delirious. I tried calling my father just to say hi and he said I sounded pretty loopy. The Mag was through an IV (my favorite) that they also used to feed me fluids and some sort of sugar water since I hadn’t eaten since breakfast and couldn’t eat on the Mag. They also started round two of steroid shots. Each round is two shots given 24 hours apart and the babies can receive a total of two rounds. The last time I was in the hospital they gave me round one. So, this time they started round 2. Finally, they gave me some indomethacin orally which is supposed to help stop the contractions. So I was getting drugs through an IV, shots and pills. Someone should probably call Intervenion.

I wish I could say that the drugs were the bad part, especially the Mag which I have heard many understandable complaints about. Unfortunately, my real problem was a policy. Hospital policy is that patients on Magnesium Sulfate drips are not allowed to walk. Supposedly the drug can suddenly make you really weak and you can collapse. Well, think of one place I might need to walk to every half hour or so. Keep thinking. Got it? Yep. The bathroom. I was not allowed to walk to the bathroom. The first nurse I had while I was there had me try a bedpan by lying in bed and sticking it under my butt and telling me to just go. Right. Of course. Just retrain your body after years of teaching it to NOT pee the bed. No biggie. Clearly I couldn’t do it. Even though I really had to pee I could not pee while lying in bed. This has to be the only time this could ever be considered a negative. So, she inserted a catheter. Alright, I expected it to hurt going in. It did. Fine. I am not a whiner so I didn’t complain. Here is what I was not expecting. I already had that holy-crap-I’m-about-to-pee-my-pants, have-to-go-so-bad-it-hurts-like-a-mother feeling. When the catheter was in and very visibly working that feeling didn’t go away. It got worse and worse and more and more painful. I promise you I am not much of a complainer. They do all kinds of weird and uncomfortable things to me here and I always say, “No, I’m fine. It feels fine. Don’t worry about it.” After about three hours of that feeling and the pain that goes with it increasing I just started bawling. It hurt so incredibly badly. Of course, even though I had been telling the nurse that it was hurting, she simply couldn’t believe that it hurt that badly. Her comment to me was, "If it's uncomfortable enough to prevent you from sleeping we can take it out and re-insert when you need it." Seriously, "if it's preventing me from sleeping"? IT'S PREVENTING ME FROM BREATHING you crazy woman!!!! I told her she had to take it out, which she did. Well, when she pulled it out did that feeling go away? No. This is me we are talking about. Of course it didn’t. So I’m bawling and telling her it still hurts and she’s asking, “Why are you crying? Are you scared?” Are you scared? Are you kidding me? Though I may be crying my communication skills have not been that impaired. I am telling you why I am crying. It hurts. She is unable to process this information. Lucky for both me and her, her shift is over. 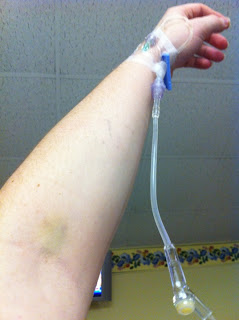 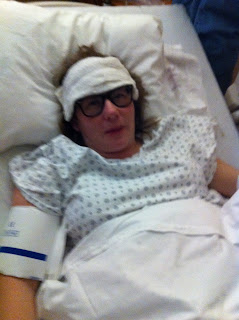 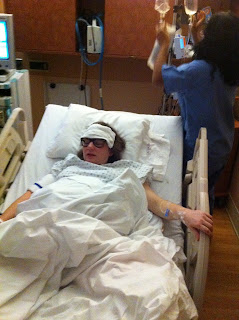 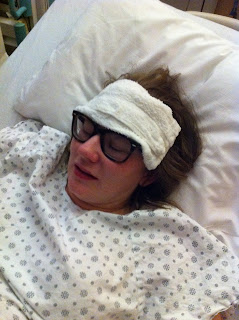 *Eric took these lovely shots while I was on all the medicine and having fun with the catheter. I especially like the top one where I look like I belong on the exorcist.*
*In the middle of the second shot is the back of the nurse's head*

Then an angel arrives. A sweet sweet angel sent from God himself. A woman I will never forget. After the catheter is out I know that my bladder is empty so trying the bedpan again will do nothing. The doctor comes by and tells me I am allowed water, which is such excellent news. I am parched since I haven’t had any water since breakfast. Also, because of the monitors I have had to lie on my back, which makes my nose completely clogged, impassible by even the slightest stream of air. Therefore I have been breathing out of my mouth for a few hours and have had no water. The other excellent news she brings is that the fetal heart monitors can come off and only one contraction monitor has to stay on. Hallelujah. Unfortunately, all of this is overshadowed by the intensely-sharp and unrelenting pain in my bladder region. This is where the angel comes in. I tell my new night nurse that I have to try the bedpan again. I am just praying I can go because it’s now been a totally of about 5 ½ hours since this feeling started. I told her that I wasn’t able to do it when the other nurse tried. And that sweet sweet angel said she would put it on a chair right next to my bed so it was more “toilet-like”. It actually worked. I have never in my life experienced such joy and happiness as I did when I finally peed that night. I had no idea I could ever have such a passion for urination. The immensely lightening feeling of relief made me want to cry. It was such a beautiful, beautiful thing. I have my doubts about my babies’ birth being able to live up to the ecstasy felt that day. She then took care of the bedpan and put it back on the chair so I could just use it whenever I needed to. I made excellent use of it. The Mag infusion finished at around 3:30 am and they also took the contraction monitor off at that time. I could finally roll on my side, use a real toilet and drink real water. After watching some Netflix on my phone I eventually fell asleep for a couple of hours. Dreaming about my new love, peeing.