Dr Devine had said she would do an exam on Friday to help her
determine whether I should go home. Of course I woke up Friday and
spent ample time looking my prettiest. I shaved my legs and showered
and changed my shirt (I had no more clean pants so I had to wear the
same ones). I know. Clearly I was serious about this momentous
occasion given the massive amount of work that went into all that.
This was like the biggest day of my life since the mag stopped and I
got to pee. I knew she wouldn't be there til evening so I bided my
time crocheting. Yes, I finally got all those knots undone. Although I
also made a vow that I will NEVER purchase unwound yarn again. Why
they even make unwound yarn is a mystery to me. Yeah, okay, maybe it
is easier to package and maybe loomers or something need it unwound. I
don't care. It's a terrible idea. Back to the point.

At about 10 someone came to my room while I was sound asleep (I don't
sleep at night but I take lots of naps) and knocked on the door. When
she poked her head in she said, "You're Ms Silverstein?". I affirmed
rather groggily and she shut the door. I promptly returned to my nap.
A few minutes later, another knock. Same lady. This time, rather
annoyed, she says, "I'm here to take you to your ultrasound." Okay I
knew I was having an ultrasound but you never know what time so it's
not like anyone had said, "Be ready at ten." Second, she didn't say
that the first time. She just asked who I was. I am not a mind reader.
A billion people come in and out of my room everyday so I am pretty
sure there was no way for me to divine that you needed me for
something so I am not sure you need to be annoyed with me. I scrambled
to get on my flip-flops and grab my phone. I took a seat in my sweet
ride and we were on our way. By the time we got down the hall and to
the elevator the woman says, "Where's your bracelet?". "I have no
idea. It must have fallen off in my sleep.". Ha! you thought I was
annoying her before, well apparently that was just the beginning. "Uh,
you need that," she tells me. Ok well that's fine but I can't do
anything about that right here. She asks some buddy of hers that just
passed us to babysit me while she went back to my nurse and got
another wristband. Obviously, keeping my mouth shut for the rest of
the trip would have been the socially responsible thing to do.
Obviously, I am a social idiot so I continued to comment on things we
passed, make little jokes, compliment her, etc. It took a long time
for her various grunts of reply to communicate to me that talking was
not a sweet idea. Eventually we reached our destination and the
torture ended. Now, I had learned the first time I was locked up that
you have to bring something to do with you, thus the phone. Do you get
dropped off in the waiting area? Oh no. They park you in a hallway and
then you wait for a tech to come out and get you. Last time that was
about 45 minutes. This time it was only about 20. It's not like there
are a bunch of people in wheelchairs waiting. It's just you, awkwardly
sitting in the middle of a hallway meant for walking, watching people
pass by, having to see the same people go in and out and decide
whether you should smile the 38th time they pass you or continue to
pretend you are not sitting in a hallway and ignore. Here's me in the
hall: 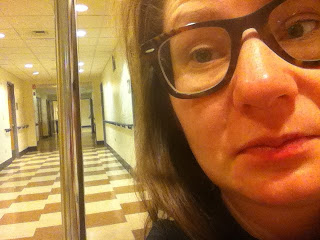 Eventually I got the ultrasound, everything looked ship shape and I
got to go back in the hallway to wait for my ride back. Luckily it
only took about 20 minutes as opposed to last time when it took over
an hour and a half.

Eric came by that evening just in time for the doc to come by. It was
possibly the most suspenseful moment in history. We're talking more
suspenseful than every sports movie where there is a tie and it comes
down to the last play/second/shot etc. I got ready and laid back. When
she was done she said "Yeah, it's 3cm and about 90%". Then she walked
into the bathroom to wash her hands. Eric, somewhat trepidatiously
asks, "So what does that mean?". Her reply? You really wanna know.
Come on, if you have been on Facebook you already know. Okay fine. Her
words were, "Well, you're not going home". She said it just so it
sounded like "well obviously your not going home crazy person". It was
perfect. She said it just how I would have. A girl after my own heart
I tell ya. Anyway, point is I wasn't stable enough to go home and she
will re-evaluate at 32 weeks. She is also pretty amazing and so she
sat there and chatted with me and Eric about medical and non-medical
stuff for at least an hour. Sorry but you are just not as cool as her.
Get over it.

Yeah, being in the hospital isn't completely awesome. I am currently
suffering from severe Fenway dog withdrawal syndrome. My symptoms
include dreaming he is next to me at night, watching little videos of
him for like an hour at a time and missing him. See how smooth that
was? They should just give me a medical degree. That said, even though
I only write about the ridiculous, it could be a lot worse and I am
certainly not miserable. I think it helps that I had been on bed-ish
rest for several weeks before coming so it's not exactly like my daily
activities have changed tremendously. At home, I laid on the couch all
day watching tv and playing on the computer. At the hospital I lie on
the bed all day watching tv, playing on the computer and crocheting.
At home I wasn't allowed out of the house except to try and get my fat
self to doctor appointments. In the hospital I am only allowed out of
the flor when pushed to an ultrasound and the docs come to me. Not
what I would call a major lifestyle shift if ya get me. Believe it or
not it even has its perks. At home I pay 65 smackers every time I see
a doc plus 42 bucks in cab fare to get there and back. In the hospital
I pay a low flat rate for all you can eat doctor appointments. The
food still sucks though. Don't ever forget that.