I Would Have Gotten Away With It If It Weren't For You Meddling Healthcare Professionals.

The Test
In a very fun and exciting twist I recently found out I am the lucky winner of...Gestational Diabetes! The crowd goes wild. The week before I got put in the clink (so around the 21st) I had to go take my 1 hour glucose challenge. Every preggo has to take it and I am sure we all have the same story to tell. That story is that the garbage they make you drink is beyond horribly disgusting and anyone who says it tastes like orange soda has clearly never drinken orange soda because orange soda doesn't taste like crap. I went to a Quest lab. I had made an appointment the other day. Turns out it didn't matter because the joint was deserted. After ringing the bell at least 3 times, several minutes apart, I was finally buzzed in. The lady at the desk gave me the drink. I somehow didn't throw it up. And we (her, another phlebotomist) watched The Price is Right for an hour. They stole my blood and I was on my way. A couple days later Ms Social (see I Don't Know If Anyone Has Chained You To A Bed) called and let me know I had failed and had to take the three hour. I had a sinking suspicion I had the 'betes. I don't know why I thought so. I had no symptoms I just had a feeling. Anyway, I scheduled myself to do the 3 hour after my doctor appointment on the 27th. Well, we all all know how that appointment went down. It went down with me in a hospital bed wanting to pee desperately. That's how. So I never went to the three hour. Since I was given the steroids in the hospital to beef up all the baby lungs growing in me I couldn't take the test for several days. Apparently the steroids raise blood sugar. I guess. I didn't really ask mostly because any reason to put it off sounded pretty awesome. Anyway, they instead did finger sticks on me four times a day to make sure I wasn't having crazy high levels of blood sugar. They were always higher than they really should be but never in the danger zone where I needed insulin. Although they gave me insulin once even though I was under the number that the order called for. I didn't protest.

About a week after the steroid shots were done I got the word that I would be doing the three hour challenge starting first thing in the morning. The upside was that the nurse would just do it so I didn't have to actually go anywhere. Well, because this is ME we are talking about, I didn't sleep at all the night before. It had nothing to do with the test I just do that from time to time where I don't fall asleep for a night. It's generally no big deal because I nap a little the next day and then sleep nice and sound the following nights. The problem here is that when you are awake you are hungry, like, real hungry. You have to fast for the test so eating was a no no. So, the blood taker came in at 5:30 and of course I was still awake. I gave her my blood and she left. The nurse came in with the drink at like ten to six. Ok. I thought the one hour drink was wretched but heavens to Betsy, I had NO idea what wretched was. This one was Lemon Lime flavored. Instead of having the viscosity of water or soda, like the other one, this drink was more of a syrup. Check it out: 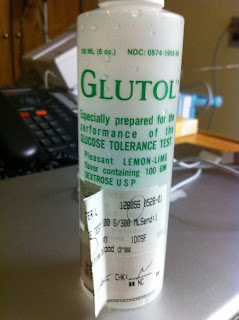 I give you this close up. Notice how it says, "Pleasant LEMON_LIME flavor". That is a horrible lie. They should be sued for false advertising. It should read, "Warning, this crap will make you throw up all over yourself". 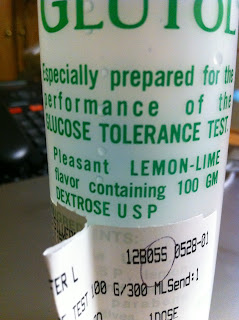 By grace of God alone I somehow managed to drink it and keep it all down. I really don't know how I did it on an empty stomach. I felt horribly nauseated from then on but managed to not throw it up. The last thing I wanted to do was have to drink again. Side note, I found out that another patient who had actually thrown up the glucose got to eat 36 jelly beans instead in order to do the test. Why is this not a first option? Anyway, I kept it down. The nurse came an hour after finishing to take the second round of blood. Well, she told me not to sit up because I was nauseous and got her needle into a vein in the crook of my elbow. Good thing no blood cae out. None. Like, not a drop. So, I am not awesome with needles. From the age of about 9 to 21ish I literally fainted EVERY time someone stole my blood or gave me a shot. Without fail, bam, pass out. Luckily, I have gotten much much better and can handle it without fainting. Doesn't change the fact that me + needles does not equal awesome. Being starving, thirsty, hot and horribly nauseous didn't really elevate the situation either. She took out the needle and went for a vein in my hand. This time I sat up cause I was not going to do this three times. She found a vein in my hand and dug in. It took an egregious amount of time, especially since I usually bleed nice and fast. And I was so so close to dropping off. The second that thing came out I let myself drop onto the bed and she brought me some cold washcloths to put on my face. I laid there and stared at the wall for pretty much the entire next hour. An hour after that the day nurse came and took my blood again. It was significantly less dramatic as it was the hour after that. However, by this time I was so over people touching me. I definitely would not have been as horribly grumpy if I had had ANY sleep the night before but, of course, I hadn't. I thought the day would get better. It had to right? How could it get worse? Oh, well, remember that awesome NST (see A Day In The Life Of A Prisoner) I had where the doc had to come in and everyone was pushing me and laying across me to reach things? Yeah, that one. It happened the same day. I knew they were doing an excellent job so I would never be rude to them but after that I literally just wanted to scream "DON'T TOUCH ME!!!!!!" to everyone who walked in the room. Every time they took vitals that day or did my finger pricks I kindof wanted to stab them. More than kindof. I did some excellent yelling inside my head.
The Results
That evening my special resident who is extremely nice and seems quite competent at his job but comes off a little condescending when you are getting to know him, and who we shall call Chris because his name isn't Chris but he looks just like someone whose name is Chris, came to give me the results. You ready? Sure? Make a prediction! Which way do you think it is going to go? You are right. I failed. I think you cheated and saw my Facebook though. He told me that all the levels were elevated and explained what it is and how to treat it, blah blah blah. I told him to go home and do something fun for me. He's so selfish he said he just wanted to sleep because he had to be back at 4:30am anyway. Jerk.
The following day, after a nice sleep, the nutritionist came to talk to me. She gave me my very own special diabetes book: 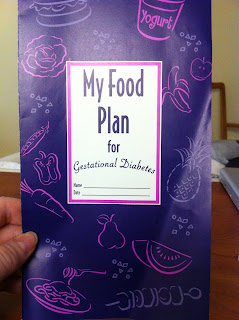 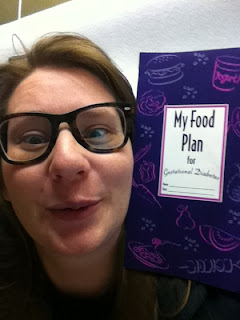 She did a lovely job telling me all about my new adventure with GD and the exciting things that it would have in store for me. At the top of my list is no more sweets. So, anyone who sees me for like the month after the babies are born will only be allowed in if they come bearing sweets. Cakes, chocolate or sour candy, brownies, ice cream, whatever you have. Those bringing dark chocolate need not apply. You will not be accepted. The GD is actually completely manageable and considering all the terrible complications every doctor I spoke to at the beginning of this pregnancy told me would happen, this isn't a bad one. Plus, I only have to make reasonable nutritional choices for like 6 weeks at the most so no big deal. Also, I can still have Chipotle, just no tortilla. Of course that was the first thing I checked. What did you think would be the first thing on my mind? Don't underestimate me.
During the afternoon the diabetes educator came by with another pamphlet all about GD. She introduced herself and asked me to read the pamphlet and she would be back the next day to discuss. She did in fact return the next day to discuss. She was not old at all but she had that old grandmother feel to her. She was dripping in sweetness and lacking in sense of humor. I am incapable of having a completely genuine conversation with a person and rely heavily on sarcasm to cover my idiocy. Most of the time this gets me by. However, this lady did not get sarcasm. It made for some awkward moments of me explaining that my comments were a joke. In the end she was very helpful in showing me how to use my uber-sexy techno gadget, a diabetes meter. I know. Stop being jealous. Not everyone can live up to the high bar of immense coolness that I set.
Now I get to wonder how much this is going to cost me considering I find that often my insurance blows.
Posted by Unknown at 3:27 PM