Welcome To The Big Apple B*&%!es

As you know, we live in NYC. This is a city definitely not designed for multiples unless you are rich and other people can take care of the hard stuff. We have had to make many changes to our space in order to be able to fit all these soon-to-be babies. First, the car. We bought this lovely little Hyundai Elantra about 14 months ago. We went with 4 doors because we knew we were thinking about having a kid. Notice the use of the singular article "a" there. We were thinking about having a kid, like one kid. As we all know that didn't exactly happen. Now, that lovely little Elantra we bought specifically to grow the family is grown out of a mere 14 months later. Ugh. So, I scour all my little triplet message boards about what cars people have and come to the conclusion that, though it may kill my spirit, a minivan is by far the most reasonable option. I swore to myself that I would NEVER get a minivan. I simply could not live with myself if I had to drive a minivan. Well, we are now the proud owners-well, not really proud, but owners, anyway, of a 2007 Honda Odyssey. Here is the beast: 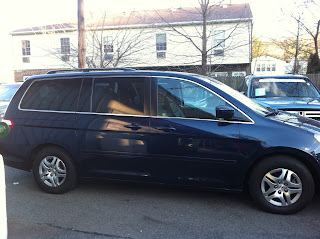 Many of you have brought up the idea of the SUV and the crossover. Trust me, I tried to convince myself that those options were just as great. In the end though, the crossover had enough room for the people but getting a triplet stroller, a couple diaper bags and some groceries in there too was getting to be a bit much. As far as the SUV goes, well, I can barely park the van so any SUV with room for the people AND the stuff was both too wieldy for parallel-parking-impaired self and ate more gas than even the minivan, which is a lot.

The car is certainly not the only place I have had to re-invent space. Maybe you missed it but we live in NYC. By New York standards our apartment is considered very decently sized. In the rest of the world, it's tiny. We also pay more than you do for your house. We have 2 bedrooms however, the 2nd bedroom is extremely small and has no closet. Welcome to the big apple bitches. So there is a lovely little Youtube Video of how our apartment used to look:

We had added some curtains to cut the living room in half soon after that video was shot but other than that, we didn't change much. That is, until the babies hit. I say they hit because the babies are like a natural disaster. They change everything in your life. Literally, everything from what you do all day to what you drive to how you feel to how you live. Well, the baby stuff completely took over the side of the front room near the patio. The whole side looked like this: 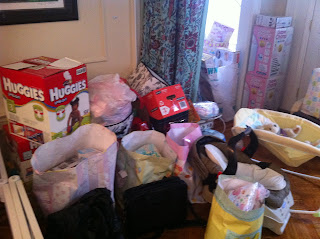 And the office looked (and still looks) like this: 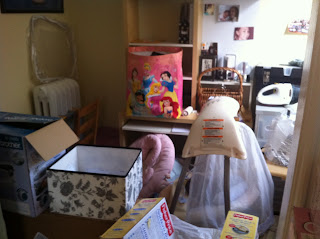 As I got to work, however, we got a new dresser thing to put stuff in and made some changes and now it looks like this: 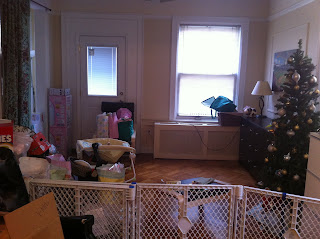 Eric is being very patient but honestly for every bag or box I undo I have to go through a whole room. For instance, there is a bag of bottles and bottle sanitizers and stuff that needs to go in the kitchen. Well, that's easy enough. No, actually, it's not easy enough. I have to re-arrange the entire kitchen in order to make space for the baby stuff. Every bag is a different room so it is certainly slow going. Someday, the desk will be out of the office, the bed and dressers from the 2nd bedroom will be in the office/living room, 3 cribs and a dresser will be set up in the 2nd bedroom. Yeah, eventually. So, if anyone is just dying to do some serious re-arranging and organizing come on over!! Also, all that furniture that has to be moved and put together and whatnot, yeah, Eric and Bradford are going to have fun with all that over Christmas. And they thought this was going to be a vacation.  As if.
Posted by Unknown at 10:20 AM