Wait, He Eats Vomit From Strangers?

I have officially been on "low activity" leave from work for 7 business days. We all know I was a social misfit before but now the only person I talk to all day is Fenway. I have started befriending all the people at the doctor's office but honestly, they seem to think it's weird. I, however, feel that their fake friendship is simply another aspect of the quality healthcare I am receiving at Columbia. When Ug called the other day about the botched ultrasound it was clear that he didn't get my humor but did that stop me from pushing my way into his heart? Oh no. When I went in, after my u/s, I was pretty happy about the whole cervix being longer thing. I came out and was like "Give me five, my cervix is longer." By force of reflex he gave me five but the look on his face said, "Does she have some kind of syndrome?" Yeah, being away from all human contact for hours a day has made me even less socially desirable than I was before, frightening as it is. I also told Ug that next Thursday we are going to bet on how long the wait will be and that the winner would get a candybar. He went along with it but the enthusiasm was severely lacking so I am going to have to work on him.
On the other hand, Lovey, totally knows my name just by looking at my face. YES!
Being the constant companion of a four-legged friend is fine but it reminds me how weird he really really is. First of all, he will only sleep like this during the day: 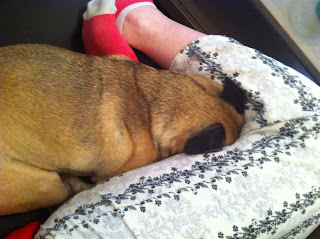 Face planted firmly in the crook of my leg. The same face that he uses to eat rocks, metal, feathers, pillow stuffing, other people's vomit from the street, leaves, you name it.
It made me think of Timba, a dog who resides with Kathy and Bradford in Arizona, and how he used to eat anything left on the counters including entire roasts, within minutes. In fact, my padre sent me this Timba update a couple months ago entitled, "DOG BURGLARS":
"Mom heard noises in the middle of the night last night, so she got up and went downstairs. Timba had just finished eating my lunch that I had in a sack to take to work today. I left it on the counter. A bag of Beef Roast left overs, 1 slice of French Bread, 1 croissant that I eat for morning break. The apple wasn't eaten, but I'm sure it was licked all over. I will need to wash it before I eat it.
Timba is living up to his reputation.
Dad" 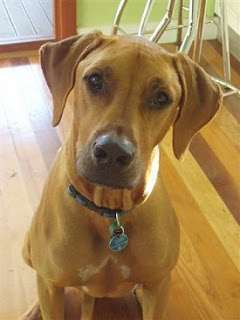