It's Fine, Doc. You Can Put Your Hand Anywhere.

Well, on that glorious 7th day of October in the great year of 2010 we had our first appointment with the Maternal Fetal Medicine specialist. English Translation- doc who specializes in high risk pregnancies, including ones with like a million babies inside.
First, got there. Well, I got there on time anyway. A certain E. Silverstein was running late. I checked in and waited in reception hoping they wouldn't call my name before he got there. Finally, right when the appointment was scheduled Eric comes flying in the doors, wearing a suit but with his tie all crumpled up and his shirt undone. I'm like, "What were you doing?" He's like, "Whatta ya mean? I was driving." So, listen people, if you are on the road during Eric's commute, watch out. I don't know what that guy does when he is driving alone.
Second, Ultrasound. We were all worried Eric wasn't gonna make it but turns out we ended up waiting 45 mins for the ultrasound anyway.
When we finally get in this is what we see: 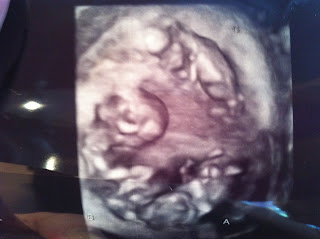 Three slightly deformed and creepy looking babies. Eric says they look like his father. I agree.
Then the tech, after being questioned incessantly about everything she was typing by a certain husband, got closeups of everybody:
Baby A (one of the identical twins) 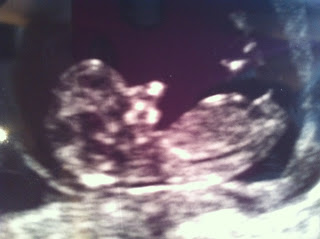 I think it has Eric's poorly formed abdomen. How precious.
Baby B (the "other" identical twin) 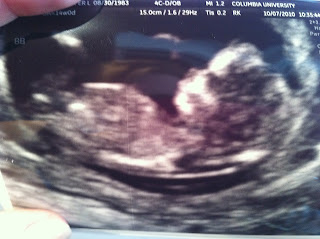 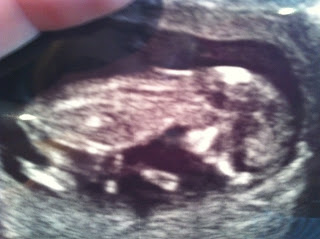 Babies A and B were very cooperative and helpful during the Nuchal Translucency tests and all the measurements. Baby C was... well... a brat. Anyone else here thinking these must be my genes coming through?
After the ultrasound, which took almost an hour, Eric had to leave. Apparently he has some sort of job that pays for us to have three babies that he has to go to. You'll have to ask him about it. I'm a little fuzzy on the details.
I went to see Dr. Devine (no, that's not her stripper name) who gave me the amazing opportunity to pee in a cup which her lovely nurse swabbed right in front of me. Now, that's what I call service. Afterward, Dr. Devine (still not her stripper name) told me about all the creepy things that happen to people who are pregnant with zillions of babies. I summarize: Anything can happen and there is nothing anyone can do about it.
Great. Glad we got that out of the way.
She then did several lovely things including a breast exam, PAP smear and cervical check. After feeling my Venti sized uterus she said I was about the size of a woman pregnant 20 weeks. I was 12 at the time (12 weeks, not 12 years old). I am pretty sure that was her way of hitting on me.
She then told me I can only work until I am 20 weeks. That's December 1.
Afterward, I got to see how disgustingly fat I have become on her scale, got like 6 vials of blood drawn and then, like a delicious maraschino cherry added to the top of the banana split of medical tests, I got a flu shot. And to think, all that only took 4 hours. You can't know how hungry I was.
Well, now that we are preggo with all these strange alien lifeforms, my new hobby is doctor appointments. I get to go on Oct 20 for a fetal echocardiogram, on Oct 21 for another checkup with Dr. Devine and Oct. 29 for an Anatomical Survey.
Eric's new hobby is making me milkshakes with delicious protein powder and not getting annoyed when I ask him 3 times in 10 mins to get me more ice water.
Fenway's hobby is still pooping on the floor when we least expect it.
Posted by Unknown at 5:21 PM