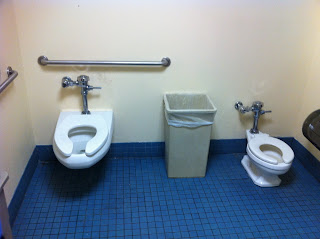 This was the choice I was faced with when going for a fetal echo at the Babies Hospital. I should never be faced with this kind of choice, ever. Sadists, all of them. It's just creepy. After that, I got to sit in a waiting room filled with snot-filled children and video games. Two young chaps, around 7 or 8 were loudly playing some sort of video game. One of the boys' favorite words was, "shit." Every time he died (on the video game, not in real life) it was, "shit." Every time he almost died, "shit." Every time he had to move quickly, "shit." This little kid just kept screaming "shit." It was SO awkward! All the other parents in the room clearly were not okay with him saying this over and over in front of their kids but potty-mouth boy's parents were totally oblivious. After we heard them talk for 5 seconds it became pretty clear where he picked up that little habit. Listen, I really don't care how your kid talks at home. I always told my students they could say whatever they wanted at home but that they needed to learn some social mores and watch their language at school. Being socially inept as I am, my natural reaction to this prolonged awkwardness shared by an entire room, is uncontrollable laughter. Eventually, every time the kid said it I had to hide my head in my coat and shake with laughter. I am pretty sure this didn't smooth things over. Now, all the parents are annoyed with the potty mouth and a little freaked out by the crazy woman in the corner who didn't even bring a child to the Babies Hospital.
On the upside, this time I was there on the correct day.
Posted by Unknown at 3:25 PM